For 75 years, the city of Nuremberg has had the honor and duty to guard the human rights regarding medical experimentation documented in the Nuremberg Code as unbreakable for the human family. In the anniversary year of all years, it has become deafeningly quiet about this achievement of humanity. Is it only us who notice this? What is Nurembergs’ opinion? Is Nuremberg ready to pass the first acid test of the Nuremberg Code? Download Open Letter as PDF

Mayor
Marcus König,
all members of the city council
and all citizens of the Stadt Nürnberg
Rathausplatz 2
90403 Nürnberg

Nuremberg is a stronghold of Franconian lifestyle and hospitality.
Since 1947, the city of Nuremberg has also had the honor, burden and duty of being inextricably linked to a reminder against inhuman totalitarianism named after it:
With the world-famous Nuremberg Code, irrevocably anchored in international law.
Wise, far-sighted people had written this manifesto as a lesson from the crimes of the National Socialist regime, in which there was a fatal complicity of medicine and power. It was to form an insurmountable bulwark against any future monstrous aberration of state and medicine.

In countless Sunday speeches, the Nuremberg Code was celebrated as a unique humanistic achievement worldwide and a shining example of the lasting victory of enlightenment and humanity over human baseness and murderousness. “Such a thing must never happen again!” they assured themselves and the world at every suitable opportunity.

The Nuremberg Code lives up to its responsibility and, with the “International Nuremberg Human Rights Award”, even “sends a signal that no signals other than those of peace, reconciliation, understanding and respect for human rights may ever again emanate from Nuremberg”.

Today, in the midst of the first trial by fire of these noble goals, we witness with incredulous amazement that the Nuremberg Code is in danger of falling victim to political scaremongering based on proven falsehoods.

That is why we ask you,
dear Nurembergers,
Dear Mayor König, Dear City Councilors,

Do you know the Nuremberg Code? What are you doing to enforce it? Will you put a stop to those who today carry out medical experiments even on those people who do not consent to this treatment or only under threat, lure or deception?
In grateful recognition of your many years of service, we hereby invite you to join our medical initiative on the 75th anniversary of the publication of the Nuremberg Code: Enforced Medicine – never again!

Let us together clarify the extent to which the media and political portrayal obscures the experimental nature of the so-called vaccination campaign. For this purpose, we make available to you in full our extensive documentation of medical knowledge gained over the entire course of the corona crisis. After looking at these facts together, let us draw courageous conclusions!

Let us show the world that we are ready to make the Nuremberg Code count! Nuremberg, set a clear sign and do justice to your special responsibility. Protectively stand in front of “peace, reconciliation, understanding and respect for human rights” – in the spirit of the International Nuremberg Human Rights Award, to “protect endangered defenders of human rights and encourage others to get involved as well”.

Nuremberg, grasp our outstretched hand to take on together the most daunting challenge of our time. We, the worldwide community of defenders of our human rights, will always support you peacefully, but unmistakably and wholeheartedly!

We look forward to your response.

Yours sincerely,
the founding members of the Action Alliance 75 Years Nuremberg Code

This letter was read and signed at a medical conference on 01/22/22 and delivered on site on 04/04/22 as well as via the contact form https://www.nuernberg.de/global/ajax_kontaktformular.html digitally delivered. 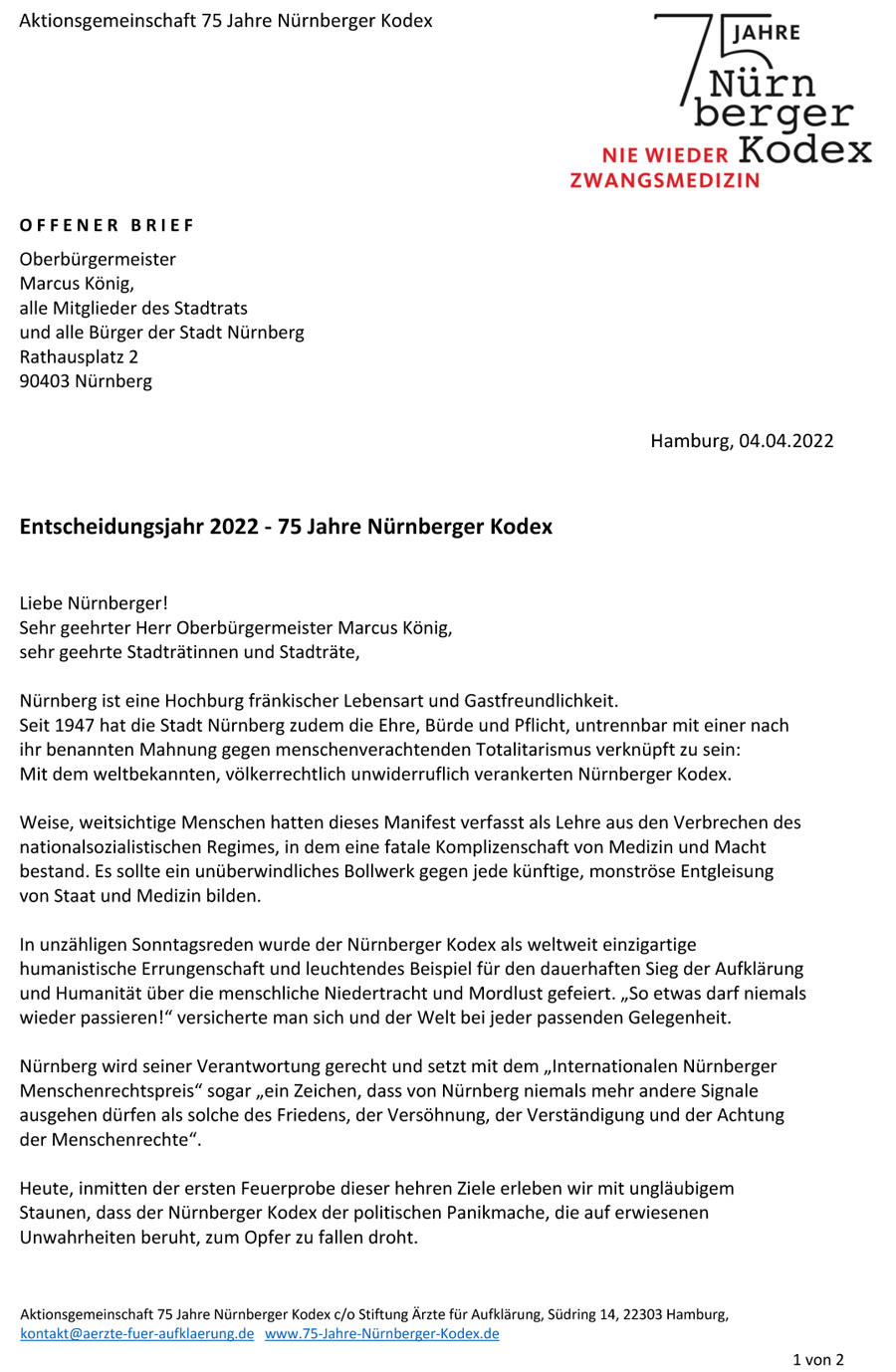 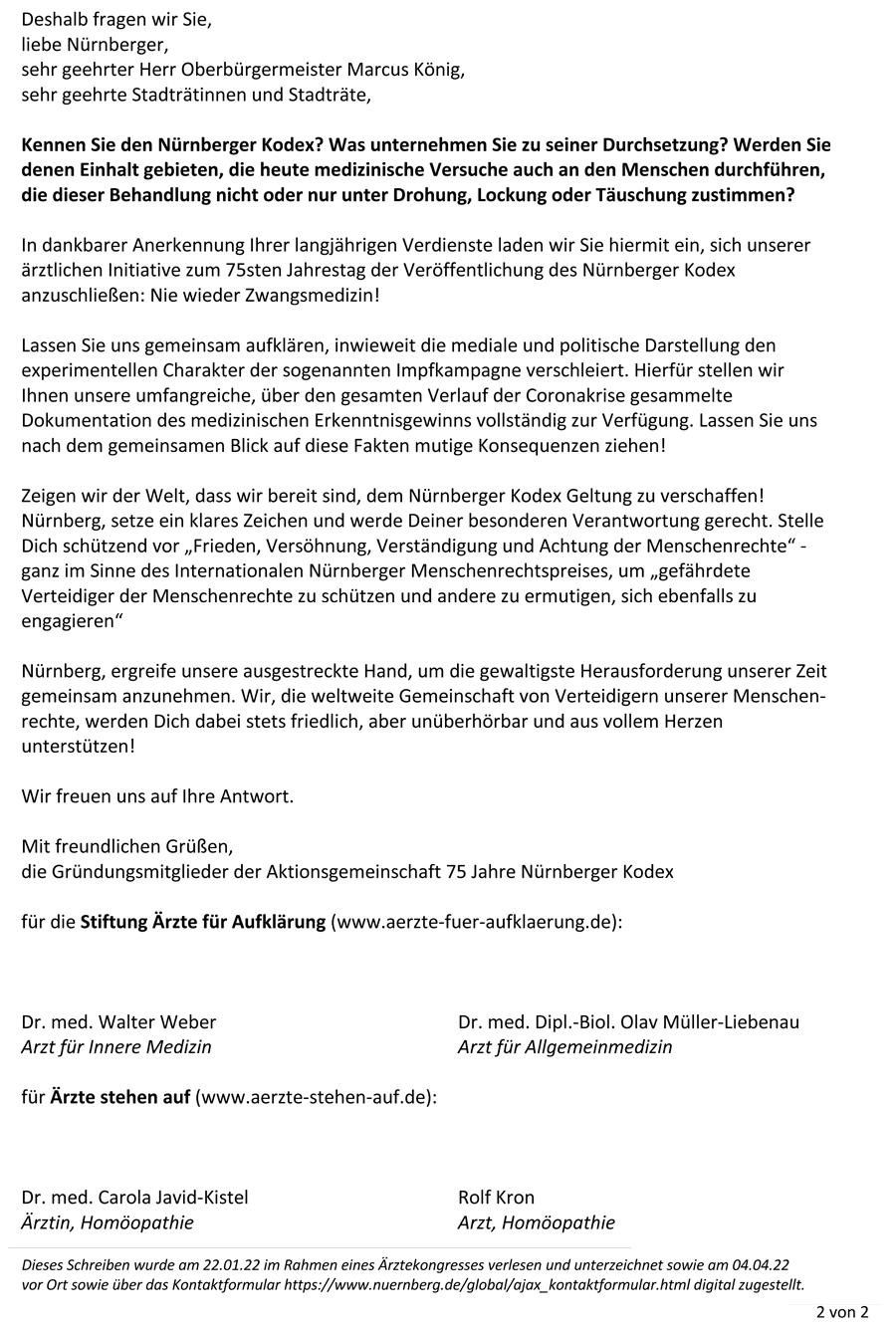